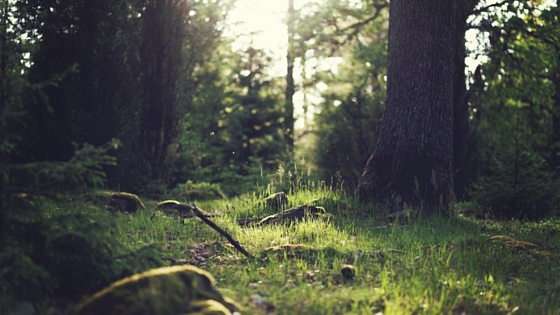 Yesterday night I read the following story to my son before bed:

"Once upon a mountaintop, three little trees stood and dreamed of what they wanted to become when they grew up.

The first little tree looked up at the stars twinkling like diamonds above him.  'I want to hold treasure,' he said.  'I want to be covered with gold and filled with precious stones.  I will be the most beautiful treasure chest in the world!'

The second little tree looked out at the small stream trickling by on its way to the ocean.  'I want to be a strong sailing ship, ' he said.  'I want to travel mighty waters and carry powerful kings.  I will be the strongest ship in the world!'

The third little tree looked down into the valley below where busy men and busy women worked in a busy town.  'I don't want to leave this mountaintop at all,' she said.  'I want to grow so tall that when people stop to look at me they will raise their eyes to heaven and think of God.  I will be the tallest tree in the world!'

The trees grew and one day three woodcutters came and cut the trees for their own purposes.  [My 3-year-old son was very distraught at this point].

The first tree was fashioned into a feed box for animals, the second  into a simple fishing boat, and the third into strong beams which were left in the lumberyard.  'What happened?' the once-tall tree wondered.  'All I ever wanted to do was stay on the mountaintop and point to God...'"

Some of the most confusing times of my life have come when I have been convinced that I was doing God's will, only to have my way blocked.  One time I thought the Lord had told me that I would marry a certain person (I didn't) and the other was when I thought the Lord had told me to go into missions.  If you have read any of my previous posts, but especially the one about wasted gifts, you know my angst in leaving China.  Since I was 16 years old, I was convinced I would serve the Lord overseas, so when He made it very clear that He wanted me to leave the field, return to America and get married, I couldn't understand how that could be His will.

Had I misheard God?

I sometimes wonder if the Apostle Paul felt confused when the Holy Spirit prevented him from going to certain cities to tell them about Jesus (Acts 16). Why wouldn't God want that? And why would God allow him to be imprisoned, when the word missionary itself means "a person SENT"?  What good could he do from inside a prison? (wink, wink)

[This is an aside:  This will sound melodramatic, but thinking about Paul in prison actually helped me to prepare for motherhood.  Stay with me here.  When I entered motherhood, I felt what my husband and I call The Narrowing happen even more.  Used to being fiercely independent and willing to travel anywhere, I knew that having a child would restrict that in many ways.  To be dramatic, I was being put in Parent Prison.  How was this better than seeing "the nations" come to Christ?  But it was helpful to think of all the ways Paul ministered FROM prison.  Think of all the "prison epistles" we wouldn't have if Paul had never spent that time in a jail cell...]

In addition to Paul, I can also relate to David and Moses' passion to serve God in a specific way that didn't go as planned.  David's dream was to be the one to build a temple for the Lord, but God chose his son, Solomon, to do it instead (2 Sam. 7). And when Moses finally tried to right the injustices against the Jews (by fighting and killing a man), the timing was all wrong (Exodus 2).  Instead, he fled to Midian for 40 years before he was truly called via burning bush to go back to Egypt and convince Pharaoh to let his people go.

Lately, I have actually been thinking of my time back in the states as "My Midian."  I came here to get married, have children and now "tend the flock."  Moses actually seemed to forget all about the plight of his people, just as many days go by for me now without a thought of China.  But God was the one who "heard the groaning; and God remembered his covenant...God saw...and God took notice of them" (Ex. 2:24).  This doesn't remove our responsibility, but it certainly assuages my guilt when I remember that God is the one who sees and delivers--not me.  Moses had moved on and was just living his life.  And THEN he was called in a way that was unmistakable.

Conclusion to The Three Trees:

"Many many days and nights passed.  The three trees nearly forgot their dreams.

But one night golden starlight poured over the first tree as a young woman placed her newborn baby in the feed box...and suddenly the first tree knew he was holding the greatest treasure in the world.

One evening a tired traveler and his friends crowded into the old fishing boat.  The traveler fell asleep...Soon a thundering and thrashing storm arose...He knew he did not have the strength to carry so many passengers safely through the wind and rain.  The tired man awakened.  He stood up, stretched out his hand and said, 'Peace.' The storm stopped as quickly as it had begun.  And suddenly the second tree knew he was carrying the King of heaven and earth.

One Friday morning, the third tree was startled when her beams were yanked from the forgotten woodpile.  She flinched as she was carried through any angry, jeering crowd.  She shuddered when soldiers nailed a mans' hands to her...

But on Sunday morning, when the sun rose and the earth trembled with joy beneath her, the third tree knew that God's love had changed everything.

It had made the first tree beautiful.

It had made the second tree strong.

And every time people thought of the third tree, they would think of God.

That was better than being the tallest tree in the world."

We never really know how God plans to use us, do we?  Our gifts, dreams and plans for God are never wasted, but sometimes they may be "up-cycled" into something even more beautiful, strong and glorifying to God than we could have ever asked or imagined.

Have you ever felt you "misheard God"?  Which of your dreams for God have gone unrealized?

This post is day 7 of the series "Re-entry: Reflections on Reverse Culture Shock," a challenge I have taken to write for 31 days. Check out my other posts:

Day 1: Introduction
Day 2: Grieving
Day 3: No One Is Special
Day 4: Wasted Gifts
Day 5: I Never Expected...
Day 6: Identity: Through the Looking Glass
Day 7: Did I mishear God?
Day 8: When You Feel Like Shutting Down
Day 9: Caring for your Dorothy
Day 10: You're Not the Only One Who's Changed
Day 11: 12 Race Day Lessons for Serving Overseas
Day 12: Confessions of an Experience Junkie
Day 13: Longing for Home
Day 14: Readjusting: Same Tools, Different Work Space
Day 15: Book Review: The Art of Coming Home
Day 16: The Story of My "Call"
Day 17: Is Missions a "Higher Calling"?
Day 18: And Then I Fell in Love
Day 19: Is God Calling You Overseas?
Day 20: Life Is Not Seasonal
Day 21: What I Took and What I Left Behind
Day 22: Groundless, Weightless, Homeless
Day 23: When the Nations Come to You
Day 24: The Call to Displacement
Day 25: Scripture Anchors for Re-Entry
Day 26: In the Place of Your Exile
Day 27: Resources for Re-entry
Day 28: A Time for Everything: A Prayer of Leaving
Day 29: Journal: 8 Months After Re-Entry
Day 30: 12 Survival Tips for Re-Entry
Day 31: A Blessing
(Day 32: Writing is Narcissistic (And Four Other Reasons Not to Write)--a reflection on this Write 31 Days experience)

Linking up with Jennifer Dukes Lee